When Veer Shetty decided to get out of his mundane routine and do something good for the needy at the same time, all he wanted to do was start a millet food company that would help the poor. And 15 years later, the Telangana man who dropped out of the ninth standard managed to help thousands of farmers, win several accolades and also build a Rs. 1 crore company. Here is the 48-year-old’s inspiring journey…

Veer wasn’t very academically inclined and did not pursue his education after class 9. Since his father was a farmer, money was tight and Veer had to take care of his expenses so he started doing odd jobs, and eventually began working as an assistant to Dr. C.H. Ravindra Reddy. Dr. Reddy was a principal scientist in the International Crops Research Institute for the Semi-Arid Tropics (ICRISAT) and ICRISAT tied up with Hyderabad’s famed Ramoji Film City in 2014 to set up an agriculture theme park, which is where Veer learned everything about the farming world. While doing so, Veer also pursued his education via distance learning at Telangana’s Dr. B.R. Ambedkar Open University. 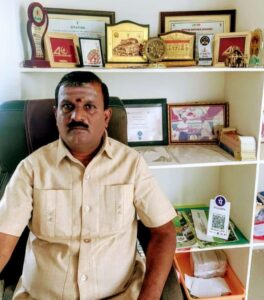 He continued working with Dr. Reddy till 2016, and he was drawing a salary of Rs 48,000, but he wanted to be his own boss and enrich the lives of others and provide them with livelihood. And while Veer decided to do something about fulfilling his wishes in 2016, his plan had come into action around 10 years earlier.

In 2006, Veer was traveling for work in the remote areas of Beed, Maharashtra, and couldn’t find any decent meal around him which led him to think about starting his own ready-to-eat food business. By the time Veer came back from the trip, he had a plan in motion, and he decided to use millet as the basic crop for his venture as he hails from Sangareddy, a district that has an abundance of the crop.

Soon Veer started a small shop in Hyderabad with an investment of Rs 25,000 while also working full time at his job. He was selling millet roti, peanut chutney, and some other nutritious products, and shares about how people laughed his efforts off.

He says, “Earlier they would mock me saying no one will buy my food, and now people stand in lines to get their hands on it,” adding, “The products we are making are healthy, nutritious and immunity-boosting.” 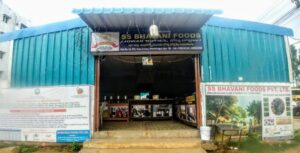 Veer named his venture SS Bhavani Foods Private Limited and from the shop front with Rs 25,000 investment, his company now generates Rs. 1 crore turnover a year. From one shop, Veer has now expanded to 13 acres of land and has 20 employees working for him. These are mostly women as he hopes to empower them by giving them job opportunities.

Now, 15 years later, he has multiple shops across India including Delhi and Hyderabad, some stores are already set up and some are in the process. His production unit is in his hometown of Chandanagar, Hyderabad, where over 25 millet products including kadak bhakri, chivda, laddu, millet rava, millet atta are produced. He has also recently launched a product called Millovit Health Mix which boosts immunity and claims to be good for warding off Covid-19 infection. 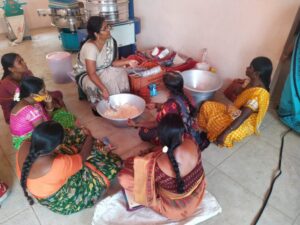 Given the plight of farmers in our country, Veer also wanted to do everything in his power to help those farmers who were working with him and so he started Swayam Shakthi Agri foundation in 2016, a non-profit organization that helps farmers by creating awareness programs that provides them with creative ideas, new technologies and so on. At present at least a thousand farmers have been given assistance by the organization. Veer also plans on providing jobs to needy people from the villages of Hyderabad.

Veer’s dedication to improving the lives of farmers was noticed by the Indian Council of Agricultural Research (ICAR) and they invited him to conduct his awareness programs in 8 villages of the Sangareddy district under their project, ‘Farmer First’.

Veer has also won many accolades for his work in enriching the lives of farmers, innovations in millet farming, and for his value-added millet products. These include the ‘Millet Man of Telangana’, ‘Best Farmer Award’, ‘Dr. M.V. Rao Memorial Award’ and ‘Best Millet Misharayya Award’ from Indian Institute of Millet Research (IIMR) Hyderabad in 2017. Veer expresses, “I am grateful to God that I have been chosen to do this work that helps so many farmers and people.”