Young blind girls from Madhya Pradesh who have formed a cricket team serve as an inspiration for several thousands of entrepreneurs who give up in life. Spare a few minutes to get yourself motivated.

Girls entering into sports
In India, young girls are inspired to take up the desired sport, excel in it and get the opportunity to make the country. This holds for popular sports such as cricket. Several women are breaking the glass ceiling. Stalwarts like Mithali Raj and Jhulan Goswami, Shefali Verma, Pooja Vastrakar and Smriti Mandhana etc., are an inspiration for cricket-loving girls around the country and gave them a reason to dream.

Blind cricket team for girls
The state of Madhya Pradesh has come up with its blind team which was formed last year. The idea existed in theory for many years, but it was executed only recently by surpassing a myriad of hurdles. The team’s coach, Sonu Golkar, played a pivotal role in making it happen. A veteran blind cricketer, he has represented India at the Asia Cup in 2016, where they lifted the trophy.

Motivation
In 2019, Madhya Pradesh could not send a team to represent the state on the national level. This thought pushed them to form the first blind women’s cricket team. In November 2021 Golkar held trials for visually impaired girls in Bhopal. “A total of 160 girls took part in it that, in itself, is a massive achievement for us. Looking at their enthusiasm, I realised that if we have the right resources, we can take this team to greater heights in the right direction,” he adds.

Technique of Blind Cricket Team
Tweaking Conventional Techniques For Blind Cricket When it comes to Blind Cricket, certain modifications are applied to make it easier for visually-impaired players. Sound plays a significant role in the game. 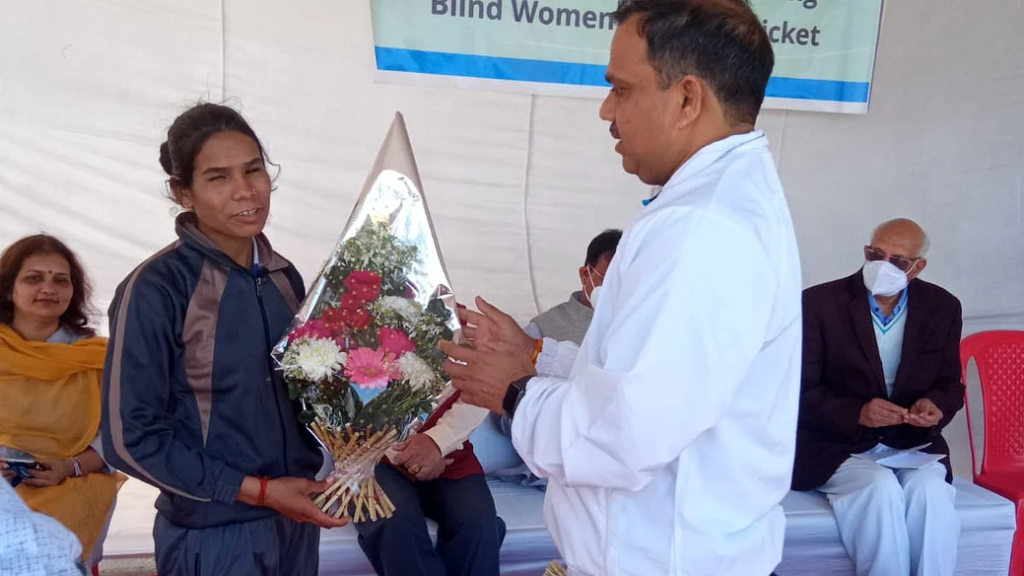 An important distinction is in the bowling technique, as Blind Cricket uses underarm bowling rather than the conventional forearm method. The ball rolling on the pitch emits the sound beneficial for the blind player batting on the crease. Another distinctive feature is the metallic stumps used by the players in match. This helps completely blind players to touch the stumps with the help of sound and execute run-outs, which is an integral part of the sport.The blind cricket dynamics also include specific jargon that divides the players into three distinct categories.

These girls serve as a motivation for all those entrepreneurs who give up easily in life.

If they can do it, you can also do it. What’s stopping you? Share your comment in the comment section below and Chalgenius is always there to provide all kind of support to you. Be free to call us @8910430165