Byju’s, India’s online education pioneer, is raising about $150 million from UBS Group AG at a valuation of about $16.5 billion, if sources are to be believed. Just spare a few minutes to know more about it….

The funding will make it India’s most-valuable start-up. An entity that is part of UBS Asset Management is making the investment. It is in discussions to invest additional money, which would take its total investment in Byju’s to about $300 million, sources said.
The startup could rope in another backer to take the fresh funding to $400 million.

The funding will make it India’s most-valuable start-up. An entity that is part of UBS Asset Management is making the investment. It is in discussions to invest additional money, which would take its total investment in Byju’s to about $300 million, sources said.
The startup could rope in another backer to take the fresh funding to $400 million.

Read this: Are you a start-up looking for investment? This person from Mumbai can help you

“The Bangalore-based startup was founded by Byju Raveendran, a former tutor whose parents were also teachers. Raveendran, 39, owns about a third of the company.
In a recent interview, Raveendran said the pandemic had dramatically altered parents’, teachers’ and students’ acceptance of online learning. The startup’s eponymous K-12 app, which brings in the bulk of its revenues, has over 80 million registered users in India who grasp math and science fundamentals through animated games and videos featuring tutor demos. 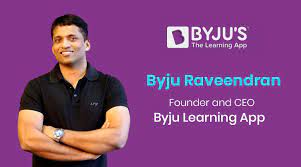 In recent months, Byju’s has quickened the pace of acquisitions including a company teaching one-on-one coding to school goers in markets like the U.S., Latin America and Australia besides India.
It bought another that specializes in offline test-prep classes for Indian school graduates aspiring to enter ultra-competitive engineering and medical schools.
After reaping a windfall from the pandemic-fueled online learning boom in its home country, Byju’s has hastened its push into international markets by renaming the coding lessons unit Byju’s Future School.